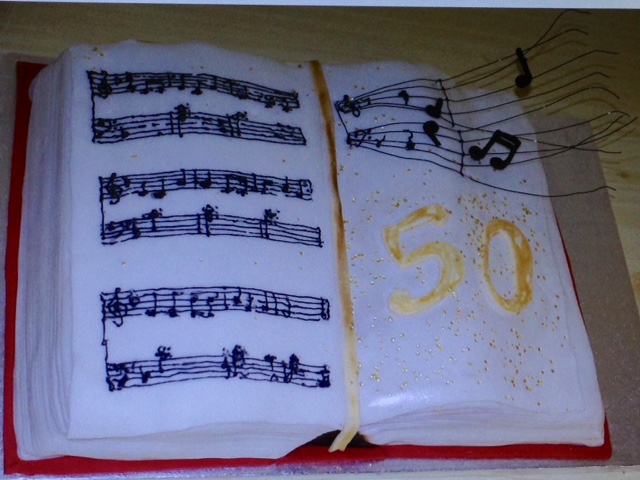 We performed Faure’s Requiem and Messe Basse and two pieces by Vivaldi - his Gloria and Credo in E minor.

As the concert marked 50 years for Chandos Choir we welcomed back previous members to join us in celebration, both in the choir and the audience! The Chairman of the choir addressed the audience as follows:

"In October 1969 the Chandos Choir sang Mendelssohn’s ‘Elijah’ at its opening concert. That a new choral society was able to put on such a large work was testament to the commitment of its members and the popularity of choral singing. We don’t know how big the choir was, but it must have been a considerable size.

"Since then we have performed nearly 306 works in 151 concerts, not including numerous soirees and parties. Our most popular composer is Mozart, at twenty-five works, but our most popular pieces are Vivaldi’s Gloria, performed ten times, and Fauré’s Requiem, performed six, and both being sung tonight.

"Much has been said about the demise of choral part-singing in an age of instant manufactured music, but there is a healthy appetite for such great music brought to life in churches and halls up and down the land. There is nothing quite like hearing music performed in front of you by a group of enthusiasts who give up their time to enjoy not just the performance, but also the technical challenge of learning the music week by week.

"We are all seduced by the crisp, perfect and over-produced recordings we hear in our homes, but lack the unedited sound of musicians performing live, in the way that all music was performed until the invention of sound recordings. We, both musicians and audience, also don’t always appreciate the man waving the stick at the front. He has his back to the audience most of the time, and is too often unobserved by the singers, with their heads in the score during the hard passages, but for ten years Robert has led us confidently through a wide variety of sometimes very challenging music.
There have been occasions when we have looked at a new score in complete bafflement. and have been guided through rehearsals to produce, if not a truly professional rendition, at least one that is musical and worthy of hearing. Robert has a powerful sense of what is within our capabilities. He expects high standards of commitment, and I hope he feels he gets that. When we feel stressed as we open the score to sing a piece, our tension cannot be anywhere near as high as Robert’s, who has to inspire us, lead us and help us to get the tricky bits right all at the same time.

"There is one person I have left out, and he is truly a member of the choir for his longserving and enthusiastic commitment to our music. Nick O’Neill has been a fixture at the organ and piano for more years than most of us have been in the choir and is an inspirational musician who is a master of the tricky art of accompaniment and is very good at playing some bits loudly to helps us when we get a bit rocky.

"I must also thank St. Andrew’s Church for providing us with a venue, support and a decent organ, and the Humphrey Richardson Taylor Trust for their generous financial support over the last four years, which has enabled us to fulfil our charitable purpose.

"Lastly I would like to thank you as representatives of half a century of audiences who have supported us and made all the work worthwhile. There is no point in performing music unless there is an audience, and an appreciative and critical audience is valuable and encouraging."