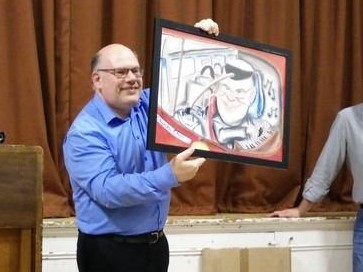 Our long-suffering Conductor, Robert Randall, was rewarded for his 10 years of leadership of our choir with a charming cartoon of him in full, multi-tasking action. At our Golden Anniversary concert we had a bit of fun at his expense by inviting members of the audience to come up with a caption for the picture. First prize was a bottle of wine and two ticket for our Christmas concert. We had some good entries but Robert judged the best to be Jennifer Sturdy's entry, picking up on the bus driver theme: "Just a minuet - that'll cost a tenor"